Eros Arabian Breeders
Read More
​Straight Egyptian Arabians represent a treasured source of the finest desert bloodlines – carefully bred for generations in the Land of the Nile and prized for their classic type, refinement and genetic prepotency.  Today, they are horses of global influence, and the story of Authentic Ibn Nawaal reflects the international impact of these exceptional horses.

Born in Germany from a German-bred sire and an American-bred dam, who herself was influential in North America, South America and Europe, five of Authentic Ibn Nawaal’s eight great-grandparents were born in Egypt and exported to the U.S.  Having been purchased by the famed Al Waab Farm of Qatar, Authentic Ibn Nawaal later traveled to the desert homelands of his ancestors to become a sire for the most heralded studs in the region, including Al Rayyan and Al Shaqab.   Now, he has returned to the land of his mother’s birth to extend his future influence beyond Europe and the Arabian Gulf.

For the very first time, breeders in the United States have access to Authentic Ibn Nawaal and his extraordinary bloodlines.   While most stallions might have prominent horses scattered throughout their pedigrees, Authentic Ibn Nawaal’s ancestry reflects legendary horses from top to bottom and through both sire and dam lines.

Bred by Rosemarie Kolster of the noted Authentic Egyptian Stud in Germany, Authentic Ibn Nawaal’s sire is Maysoun, a son of Ansata Halim Shah, a stallion credited with creating a revolution in Arabian type around the world.  Maysoun’s dam, Maysouna, has two lines to the Nazeer son Galal and traces in tail female to Moniet El Nefous, perhaps the most famed Saqalwiyah Jidraniyah mare in history.  In addition to his notable ancestry, Maysoun was a sire and grandsire of champions in Europe and the Middle East.  Along with Authentic Ibn Nawaal, he produced such champion sons and successful sires as Authentic Dahman, F Shamaal and Shahil.

Authentic Ibn Nawaal was named in honor of his famous dam, AK Nawaal.  The high-selling mare at the 1988 Bentwood Farms Sale, she was purchased by Count Federico Zichy-Thyssen for his breeding program in Argentina before later going to Germany.  Beyond her captivating beauty, AK Nawaal possessed a storybook pedigree.  She was sired by The Egyptian Prince, a Morafic son especially known for producing exceptional broodmares, and AK Nawaal was arguably his loveliest daughter.

The dam of AK Nawaal was Dahmah Shahwaniah, a mare who was the result of pairing Ansata Ibn Halima and Bint Maisa El Saghira, horses who changed the history of the Straight Egyptian Arabian in America and around the world.  Both were sired by Nazeer.  Both were imported to the United States by breeders that would create legendary breeding programs as well as become Founders of The Pyramid Society.   When first shown in the United States the typy flea-bitten grey stallion and the leggy, high-stepping bay mare created a sensation that turned a spark of interest in these “new” Egyptian imports into a raging wildfire.

Representing the Bint El Bahreyn family of the coveted Dahmah Shahwaniyah strain, Bint Maisa El Saghira is found in pedigrees around the world, particularly through her son Shaikh Al Badi.  But to find her represented in the dam line is much more difficult, thus Authentic Ibn Nawaal represents a rare source of this precious blood through the distaff side.

No matter how illustrious the pedigree, however, a stallion must also exhibit the individual excellence that reflects his heritage.  Authentic Ibn Nawaal’s type, quality and conformation ensured he earned acclaim in show rings around the world.

As a promising young stallion Authentic Ibn Nawaal was awarded numerous Junior Championships in Germany and Hungary, as well as being named German National Junior Champion Colt.  At the annual German Stallion Show  he  was a Gold Medal winner, and also demonstrated his outstanding character and athletic ability by performing with excellence at the German Stallion Performance Test.

In Qatar, as a mature stallion and in the tough competition for which the Gulf Countries are known, Authentic Ibn Nawaal was named Silver Champion Stallion in 2013.

Of course, it comes as no surprise that Authentic Ibn Nawaal is also a sire of international winners.   He is a consistent producer of smooth-bodied horses that are of sound structure, have great tail carriage and motion, excellent legs and long, well-laid back shoulders along with his large dark eyes.   This makes him a superb source of attributes highly sought after by many American breeders to further enhance their programs.  In addition to his physical attributes, the sons and daughters of Authentic Ibn Nawaal consistently possess the intelligence and character for which the Arabian breed is known.  Those who own his offspring are proud to say they consider them members of the family!

Sometimes there is an Arabian stallion that simply transcends time…
whose nobility and pride echoes the words of an ancient Arab poet;
whose extraordinary beauty is as if he has pranced forth from the painting of a 19th century master;
whose rare and precious heritage is both a legacy from the past and a gift for the future.
Authentic Ibn Nawaal is such a stallion.
<
> 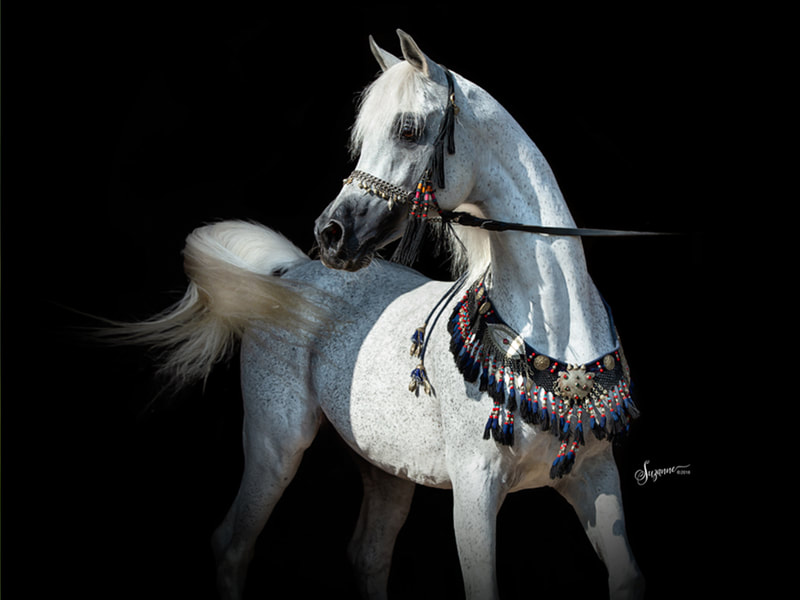 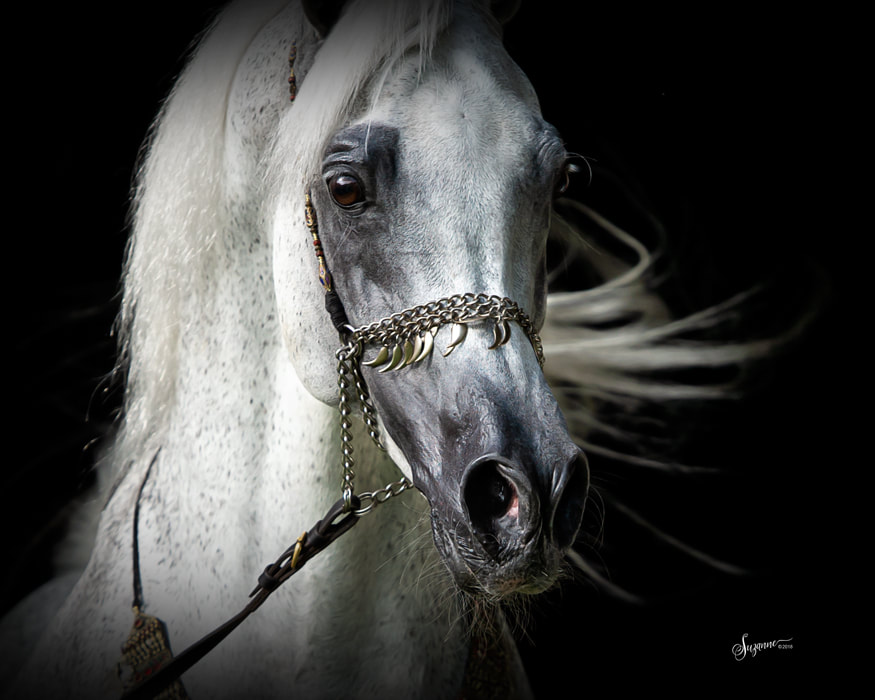 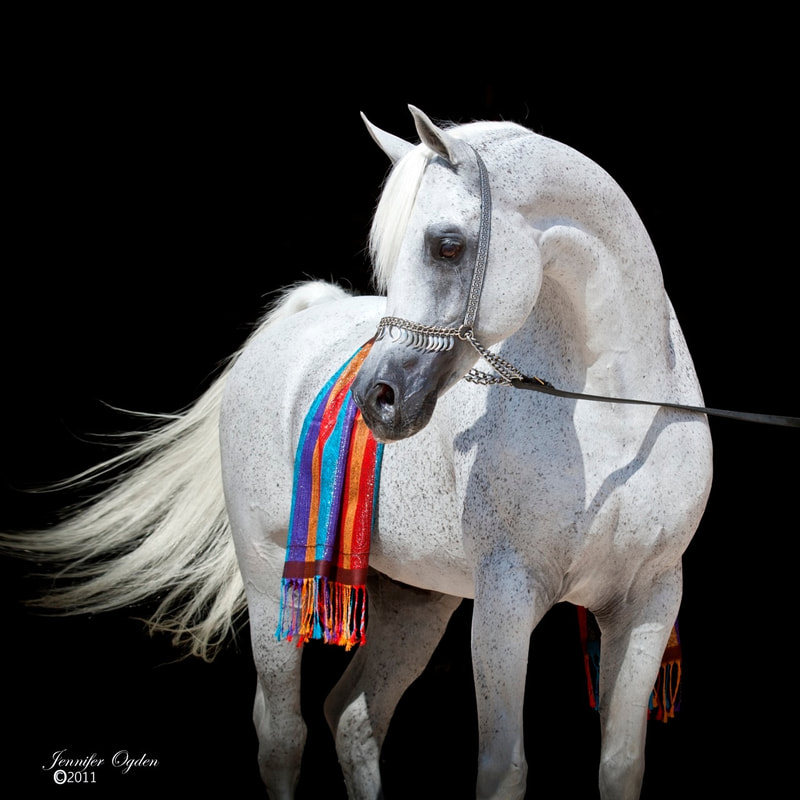 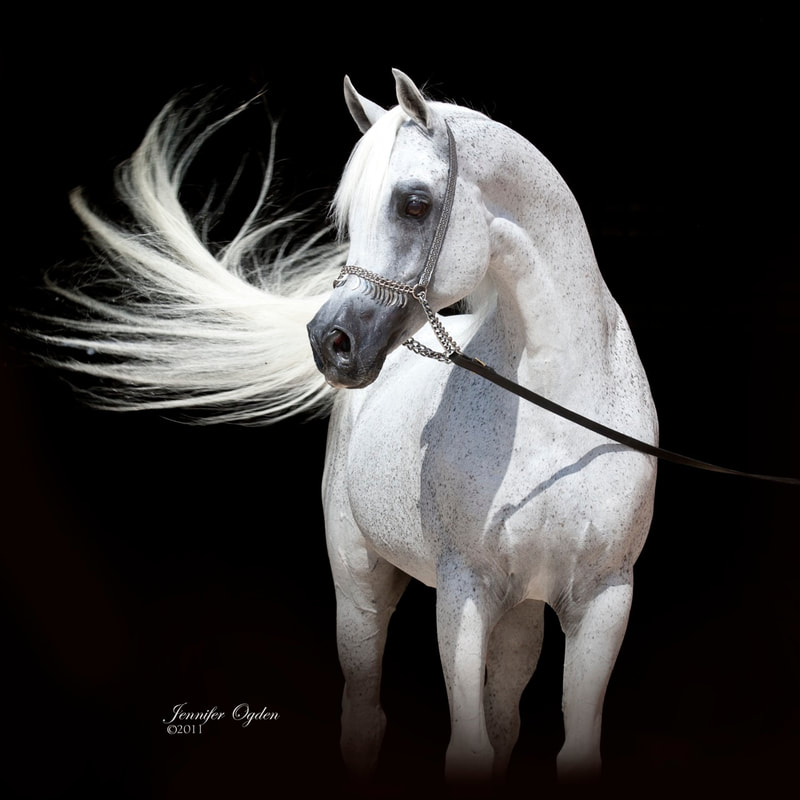 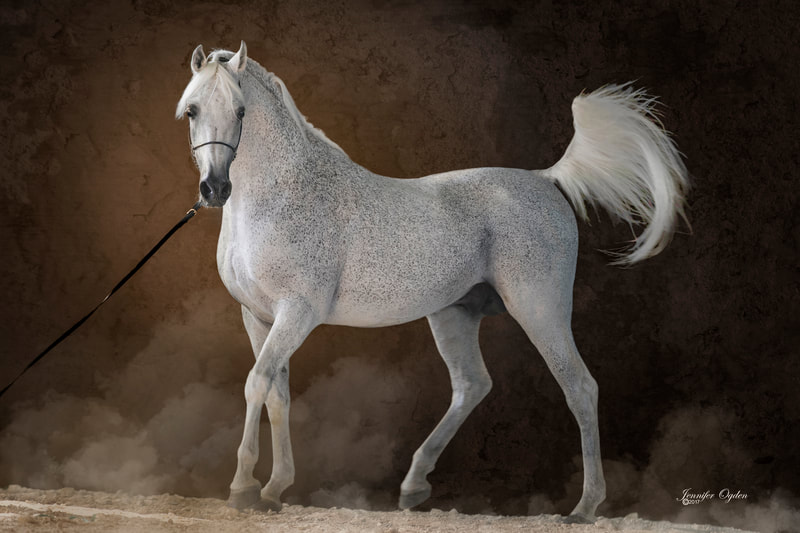 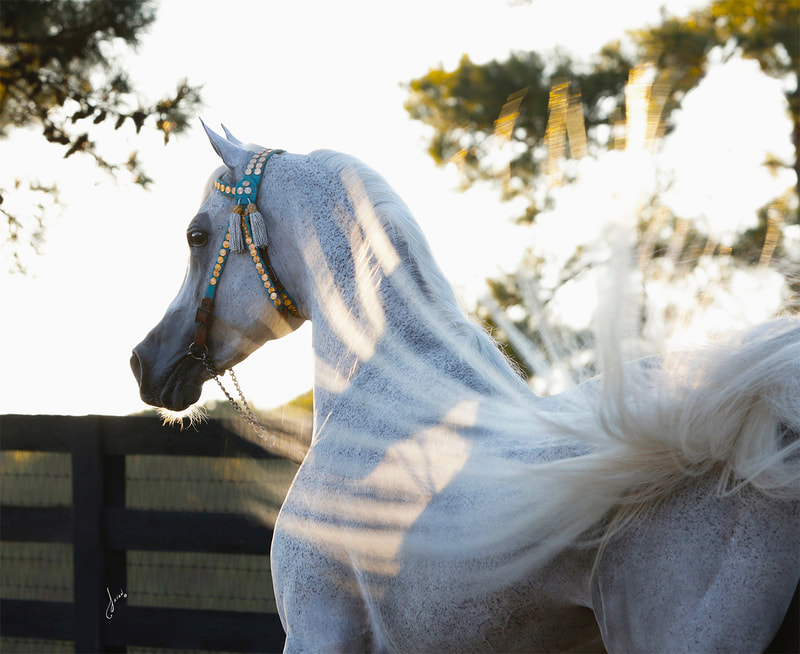 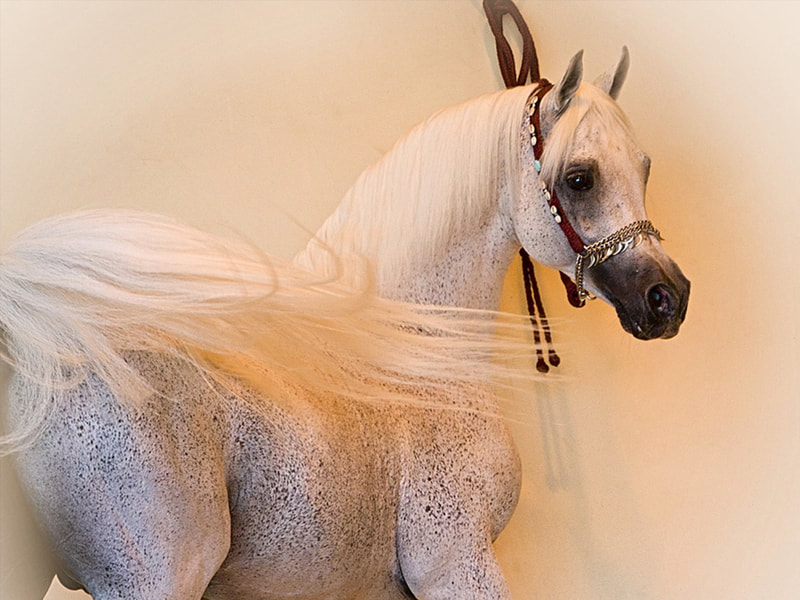 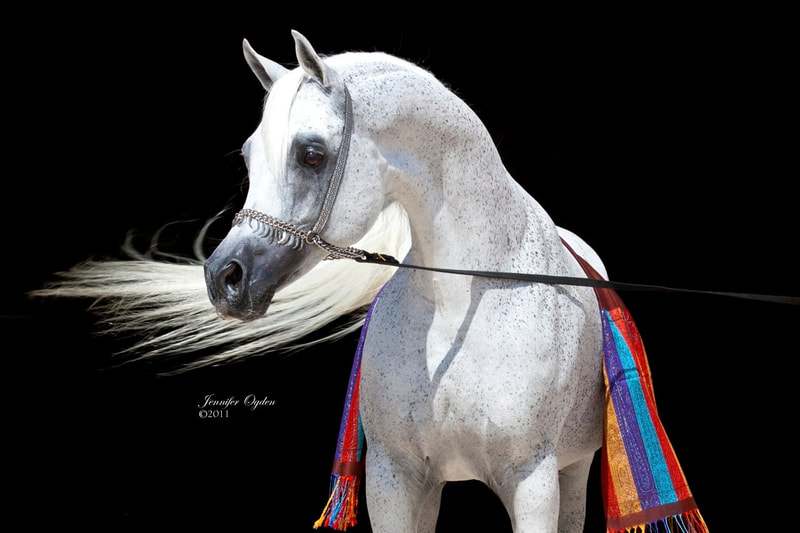 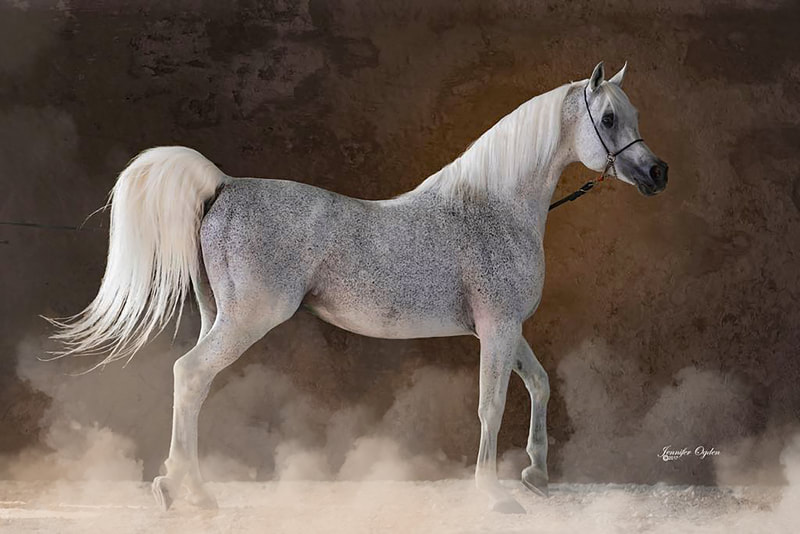 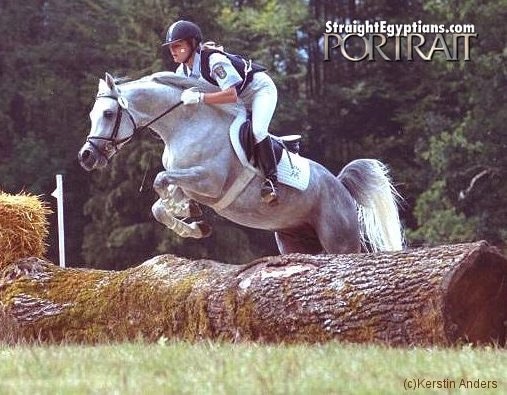 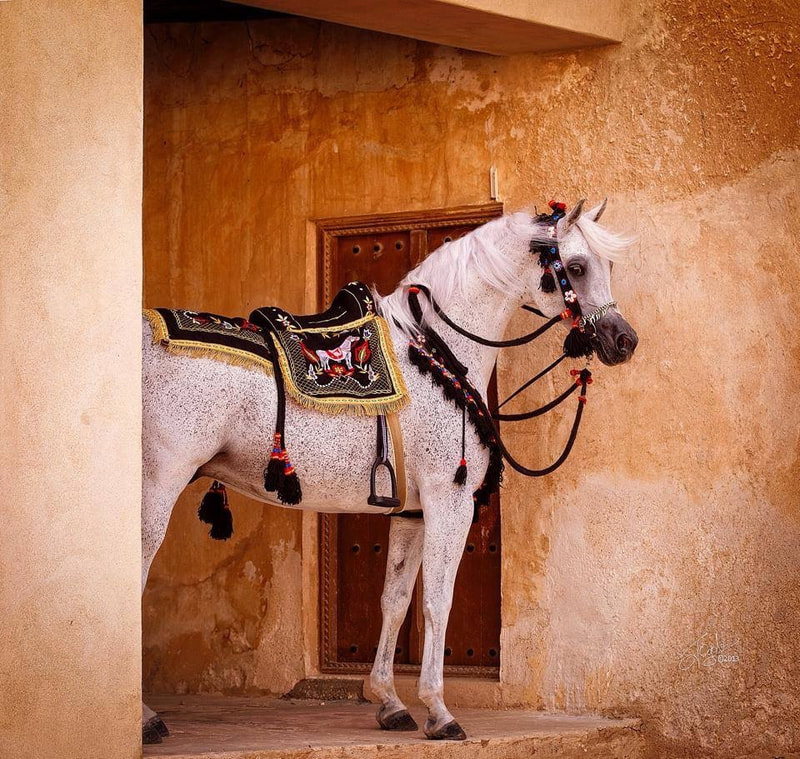 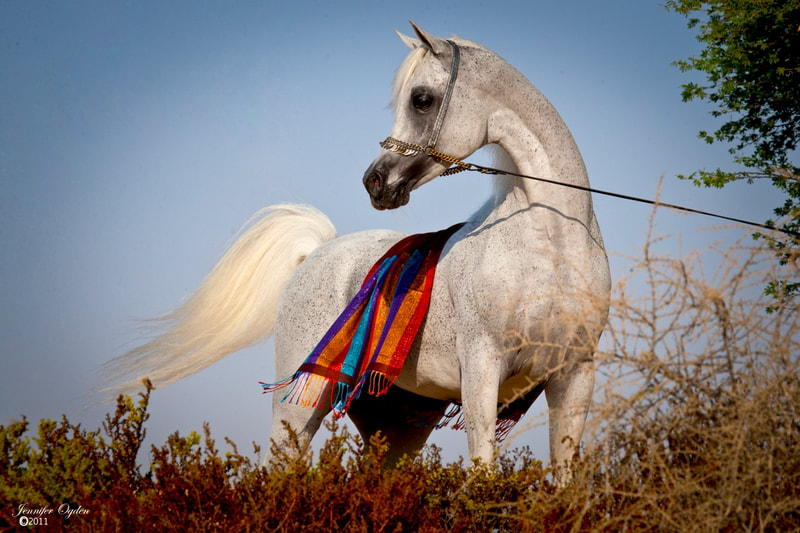 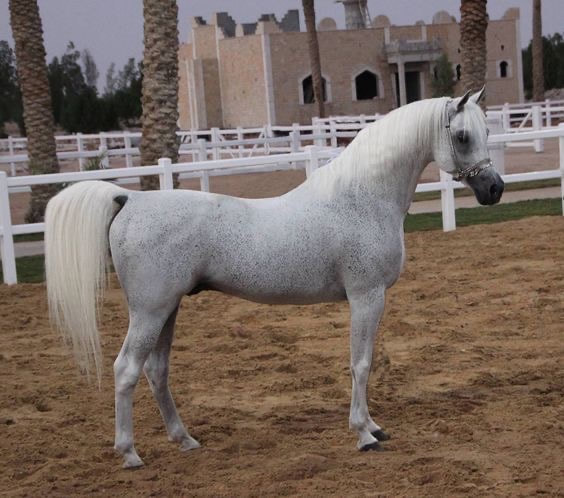 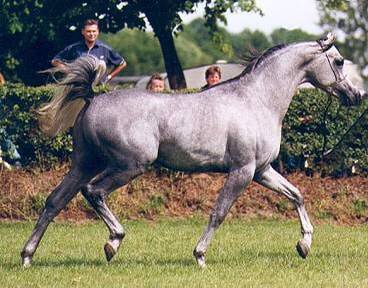 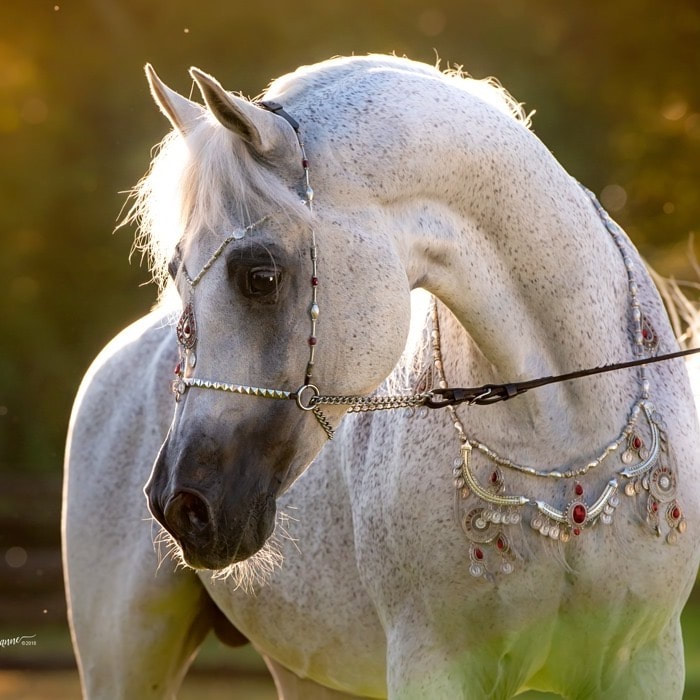 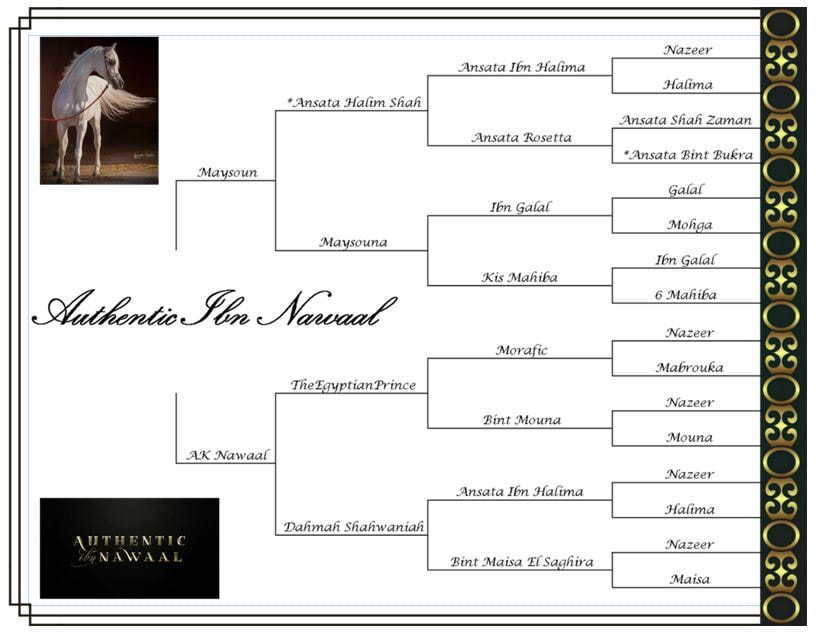 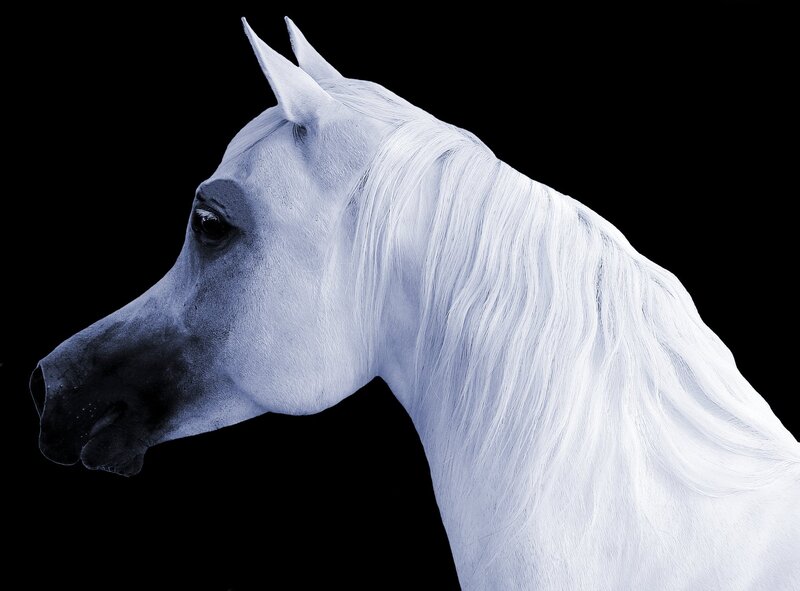 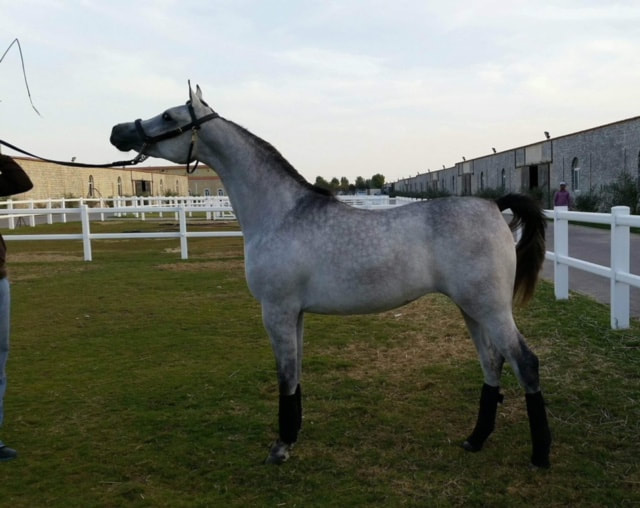 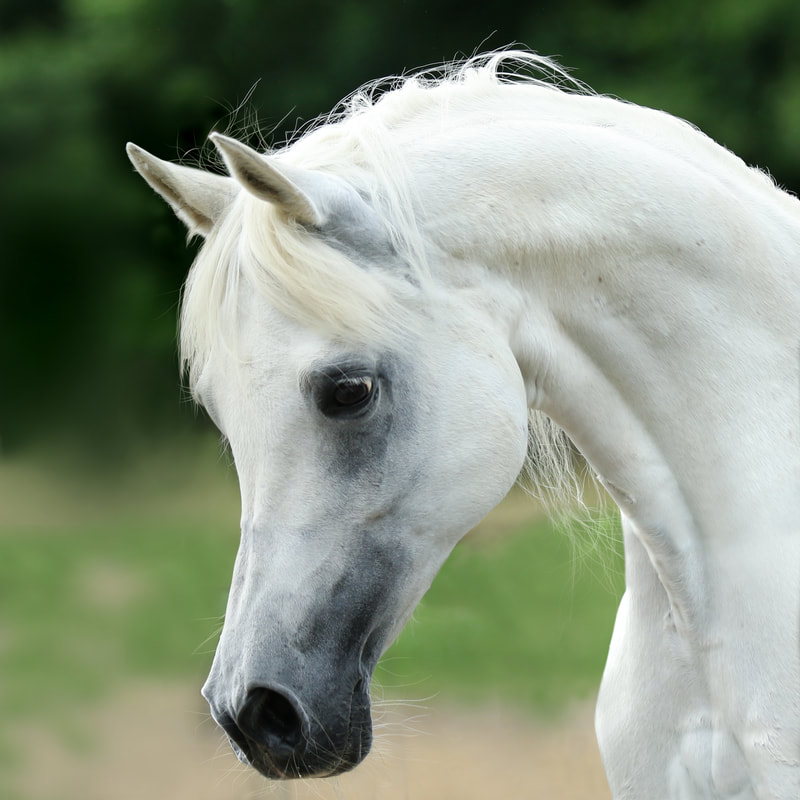 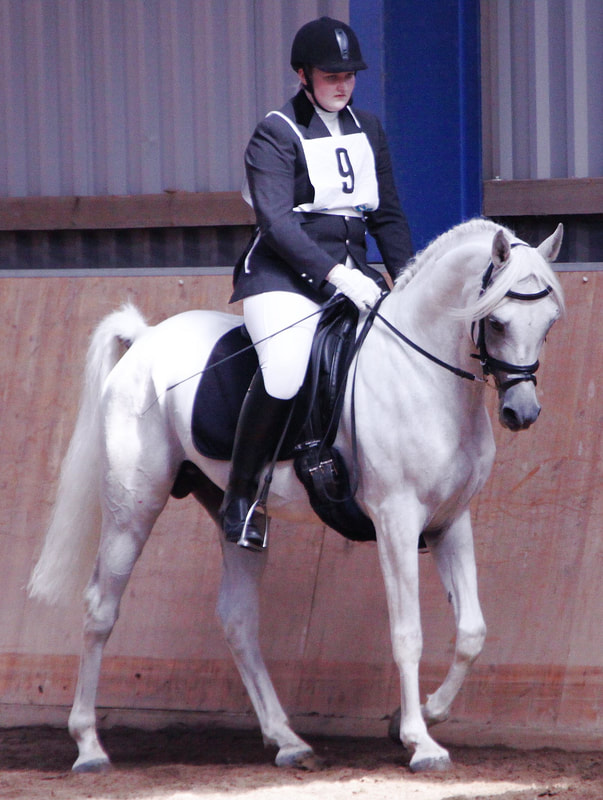 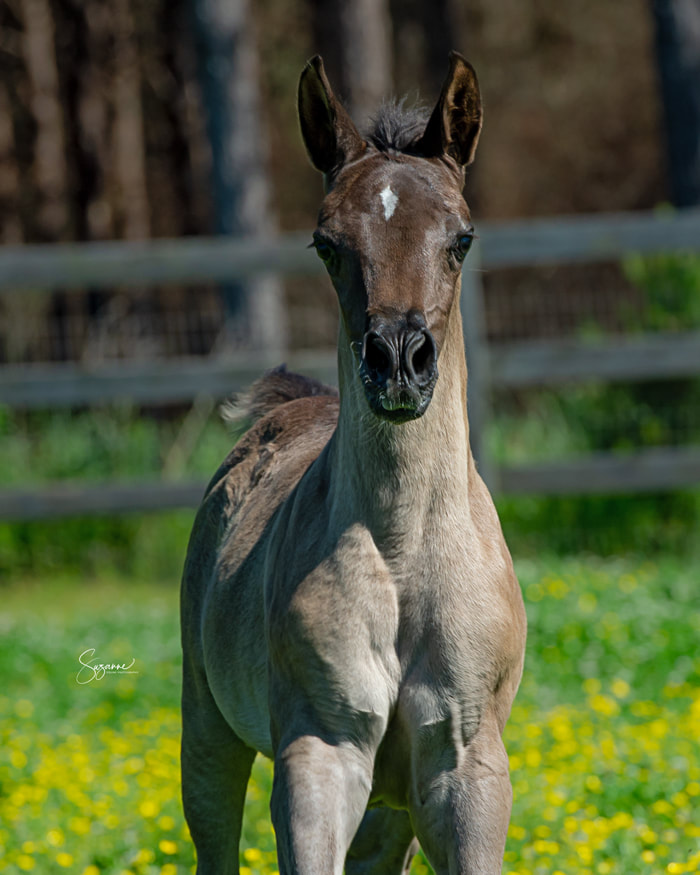 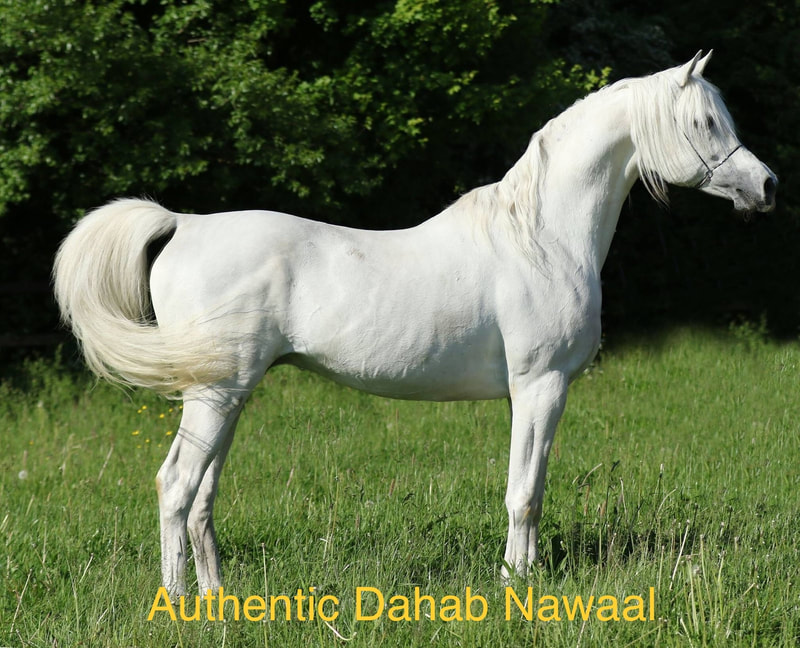 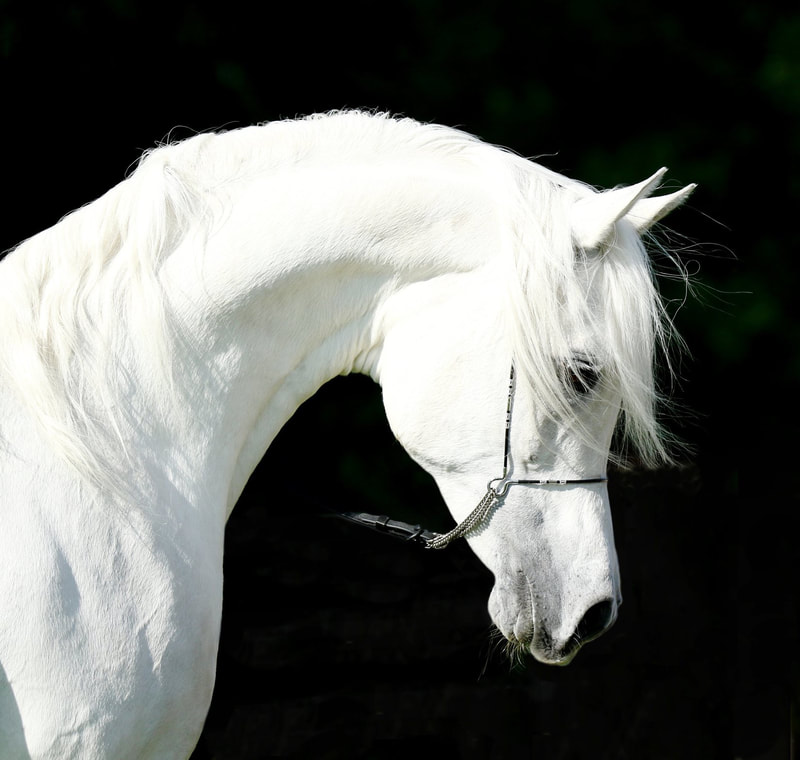 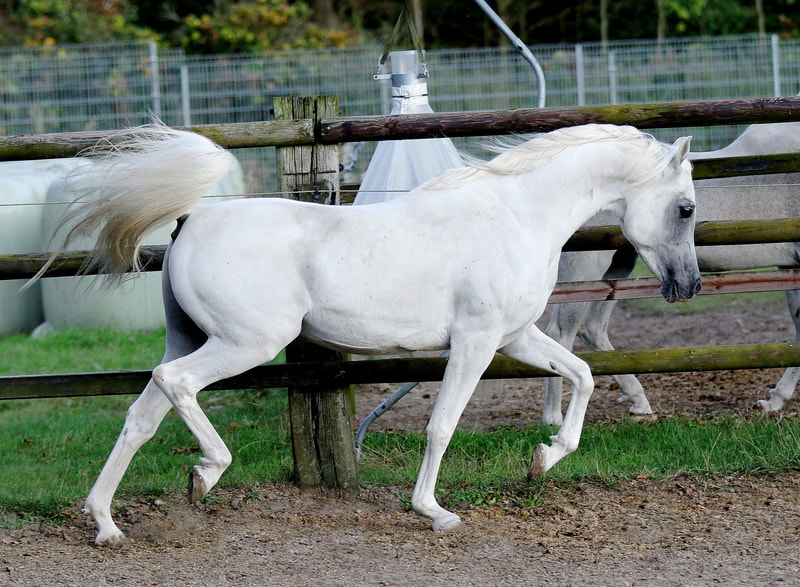 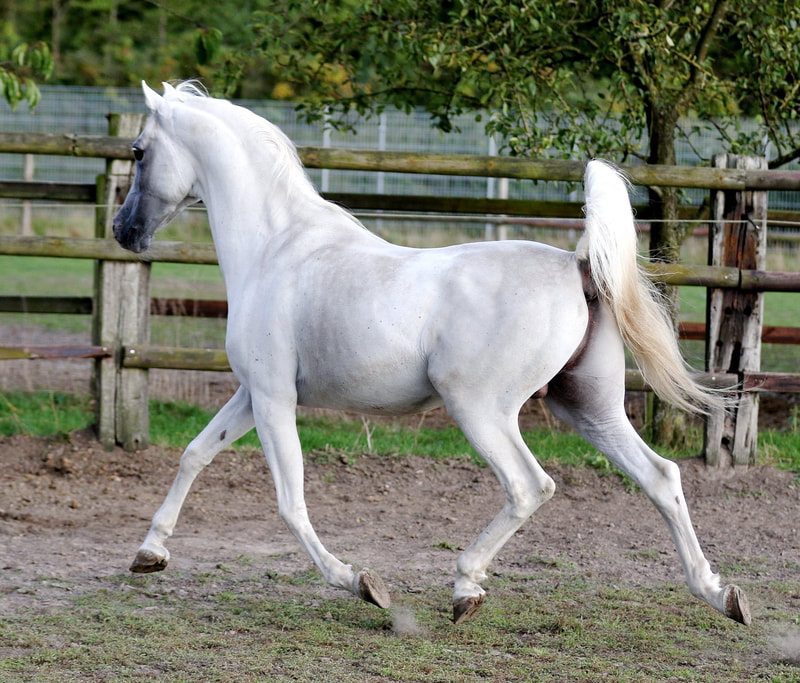 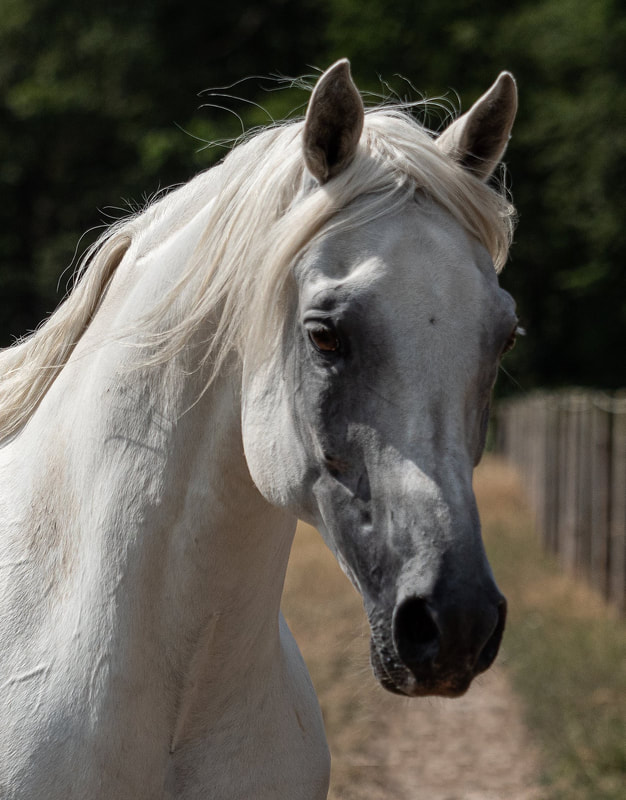 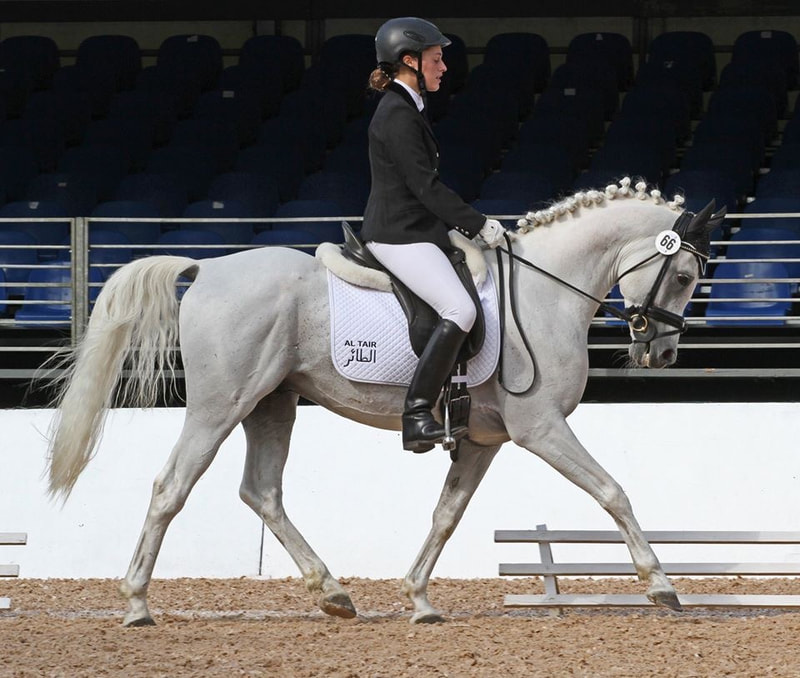 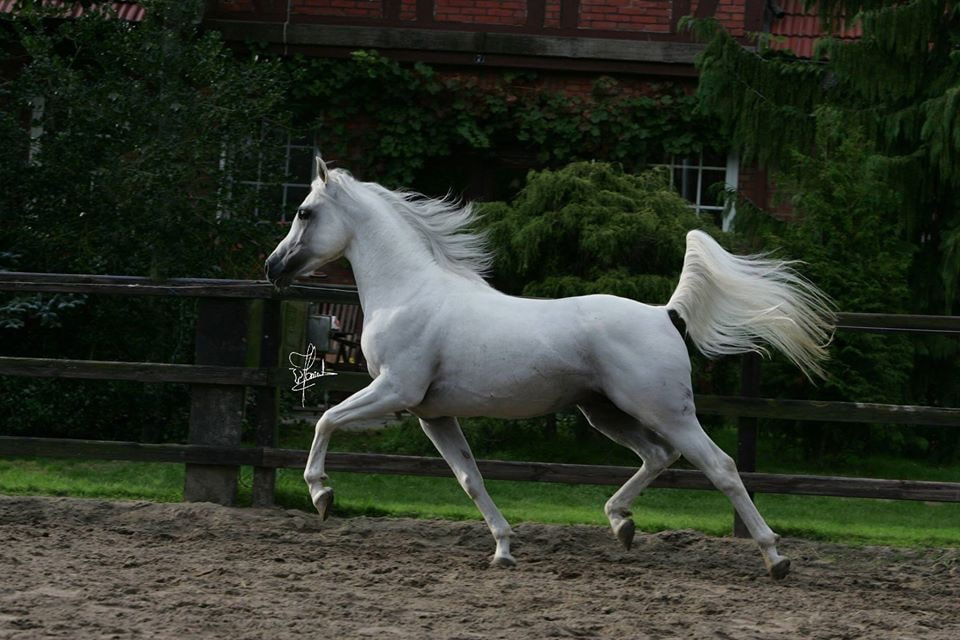 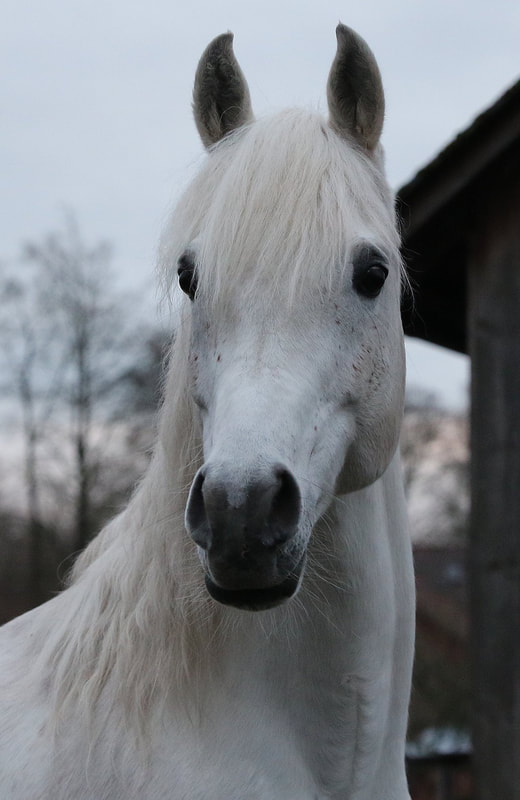 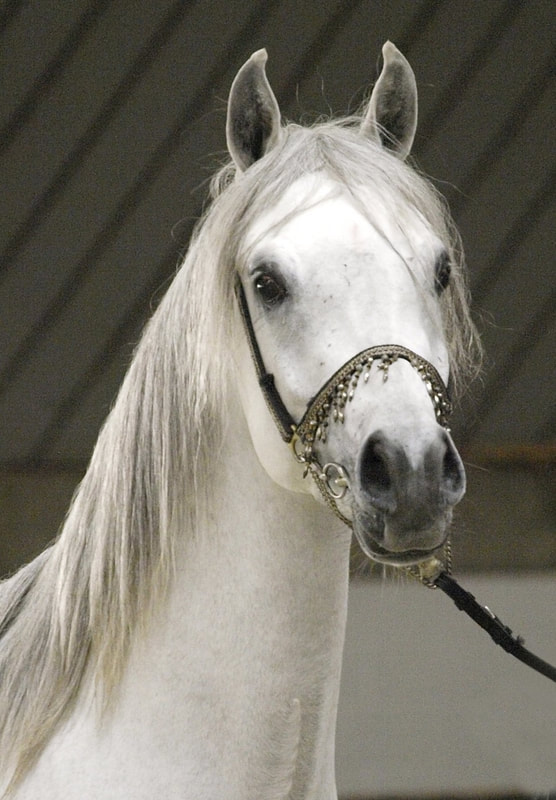